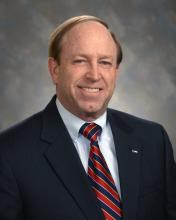 John Suthers was re-elected to a second term as mayor by an overwhelming majority in April of 2019.

The 41st mayor of Colorado Springs, Suthers’ first term began in May of 2015. In his first four years, Suthers sparked historic infrastructure improvements with the passage of voter-supported Ballot measure 2C, which established a temporary sales tax increase that generated $50M per year to fund massive road reconstruction across the city. Suthers also successfully gained voter support for Ballot Measure 2A, which re-established the city’s defunct stormwater enterprise, and now has the city on the way to building one of the best stormwater systems in the nation. Other accomplishments in his first term included the annexation of Banning Lewis Ranch, vastly improved relations between the executive and legislative branches of government, finalization of four City for Champions projects and a renaissance at both the Colorado Springs Airport and Downtown Colorado Springs. The City also created over 6,000 jobs each year of his first term, exceeding the number needed for sustainable growth.

Suthers brings decades of experience in government and management. Before being elected Mayor, Suthers served as Attorney General of Colorado from 2005 to 2015. Under Suthers' leadership, the Colorado Attorney General's office earned a national reputation for excellence. In 2012, he was awarded the Kelly-Wyman Award, the highest honor given by the National Association of Attorneys General.

Prior to being Attorney General, he was named by President George W. Bush in 2001 to be United States Attorney for Colorado and he was unanimously confirmed by the US Senate. In 1999, Suthers was appointed by Governor Bill Owens as Executive Director of the Colorado Department of Corrections, based in Colorado Springs. In that position, he managed an organization with 6,000 employees and a budget in excess of $500 million.

In 1988, he was elected District Attorney of the 4th Judicial District, which includes El Paso and Teller Counties. For the next eight years, he managed the largest and most productive prosecution office in the state of Colorado. During that time he also served as President of the Colorado District Attorney's Association and President of the El Paso County Bar Association.

John's wife Janet also grew up in Colorado Springs, earned her MBA from UCCS and is retired from Agilent Technologies. She is a lifelong community volunteer including service on the District 12 School Board and the City Planning Commission. John and Janet have two accomplished daughters and two beautiful grandchildren.

"Citizens of Colorado Springs, that is our enduring challenge. To create a society that matches our scenery. Let us embrace the challenge."