For a city with the size and complexity of Colorado Springs, there should not be a one-size-fits-all approach to transportation across the city. However, certain qualities and elements should be broadly supported, encouraged, and promoted in the transportation and connections network. These include the following:

Streets and corridors throughout our city have very different characteristics depending on the period they were built. To help address this diversity, PlanCOS recognizes several different roadway typologies to provide context for our goals and policies. Typologies identify the characteristics of these streets and what enhancements should be considered to support them. In the application and use of these transportation typologies, it is recognized that some corridors, or segments within them, share characteristics of more than one typology. It is also understood that major transportation corridors will often be planned and managed best as an integrated system of related facilities and not as isolated single streets.

The city has several thousand miles of streets. Most of this mileage is classified as local streets and provides access to individual homes and other destinations. Since many of these existing streets are unlikely to change in their use or in their need for more multimodal accommodations, PlanCOS primarily focuses on effecting change along existing streets traditionally classified as collectors and minor and major arterials. For future local streets, PlanCOS recommends strengthening their design and function at a human scale. This will result in more connected local streets with a reduced emphasis on design solely for the convenience of short distance motor vehicle travel.

As we apply transportation-related typologies, it is important to recognize that more conventional and standards-based functional classifications (i.e. “minor arterial” or “collector”) will also continue to be used in our City’s more specific or technical plans, documents, and requirements.

Transportation typologies are as follows: 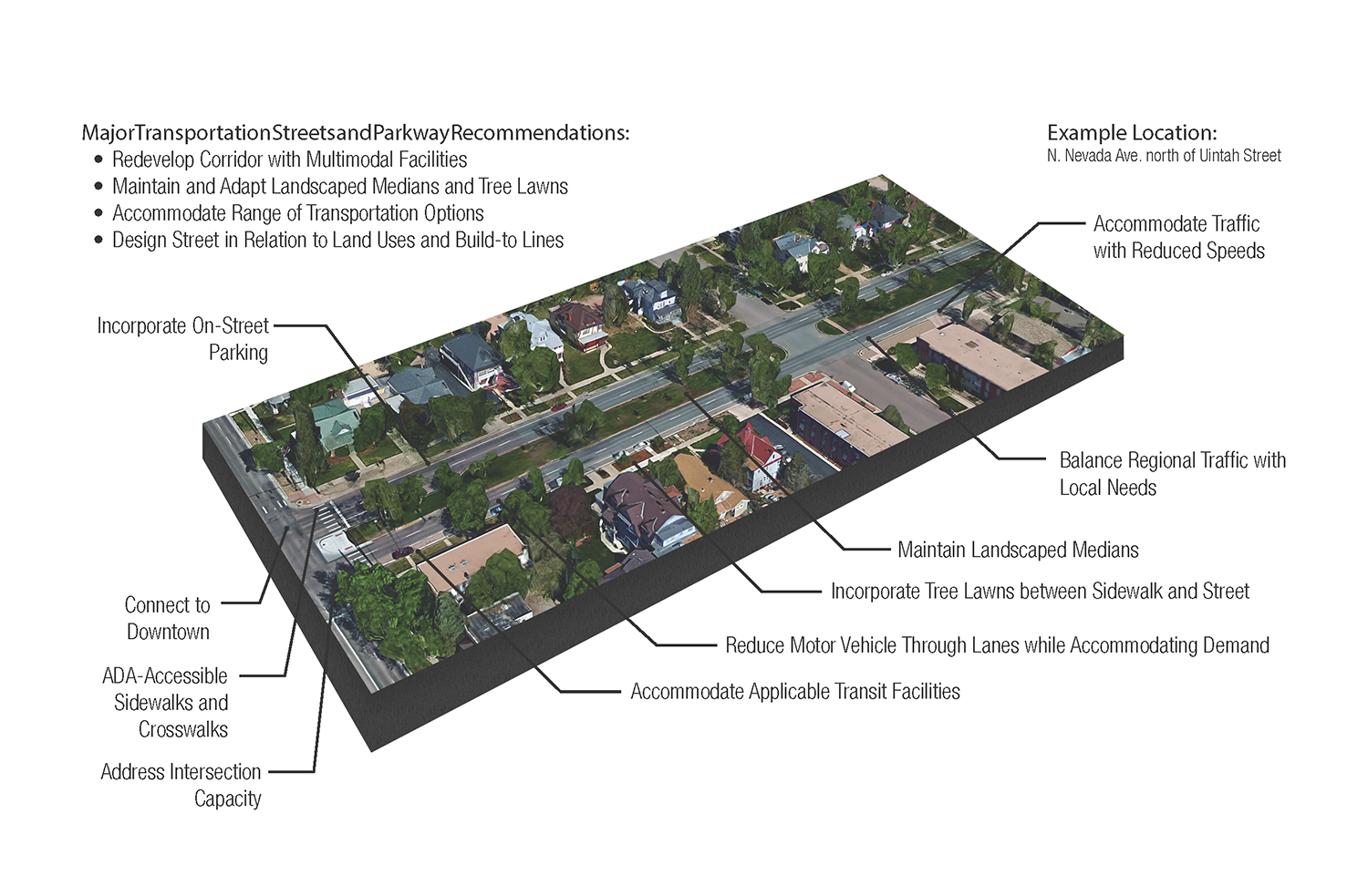 The goal of this transportation typology is to recognize the existing character of these streets, while incorporating redevelopment, and the addition of new facilities to encourage multimodal use and optimized capacity. New uses and redevelopment along these streets should incorporate elements including landscaped medians, tree lawns, and bike and bus facilities.

These are major streets in the long-established urban core areas that have been predominantly built out for many decades and encompass the area of the city in and around Downtown. Compared with other areas of the city, streets in this area have more landscaped tree lawns (the area between the sidewalk and the curb) and medians. The local system that these streets connect to is typically a more fine-grained grid. Traffic volumes are relatively stable. Within this typology, there are a several distinctions that are important to the application of PlanCOS. 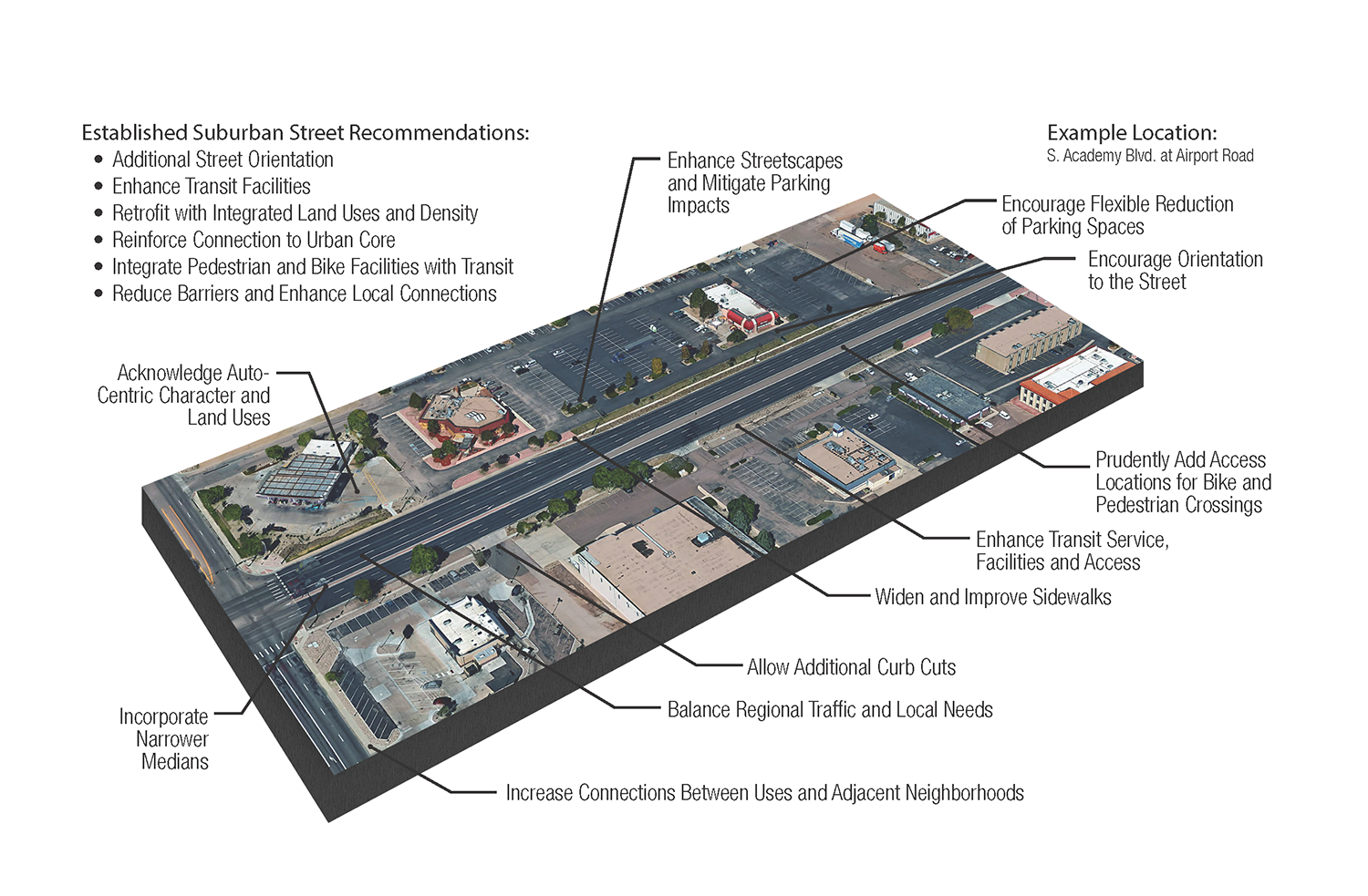 The goal of this transportation typology is to retrofit and reinvent these roadways to provide opportunities for additional integrated land uses and density, orientation of uses more toward the street, and enhanced multimodal facilities, all resulting in an increased transit mode share, optimized capacity, and reduced physical barriers to non-motorized and other local connections.

Streets of this typology are outside of the urban core and in areas of the city where streets do not have a strong grid patternStreets that are built at right angles to each other to form a grid. Fine-grained street grid refers to a pattern of shorter blocks and more intersections.. These streets were generally built in support of development that occurred between the 1950s and the 1980s. They pre-date the City’s current typical street sections. Streets in these areas may or may not have medians and if they do they tend to be narrow. Sidewalks may be attached or detached from the street, but the separating landscaped area or tree lawn areas are generally smaller than in the urban core. These streets often lack multimodal elements such as bike facilities, multi-use trails, and bus accommodations. Within this typology, there are several distinctions that are important to the application of PlanCOS. 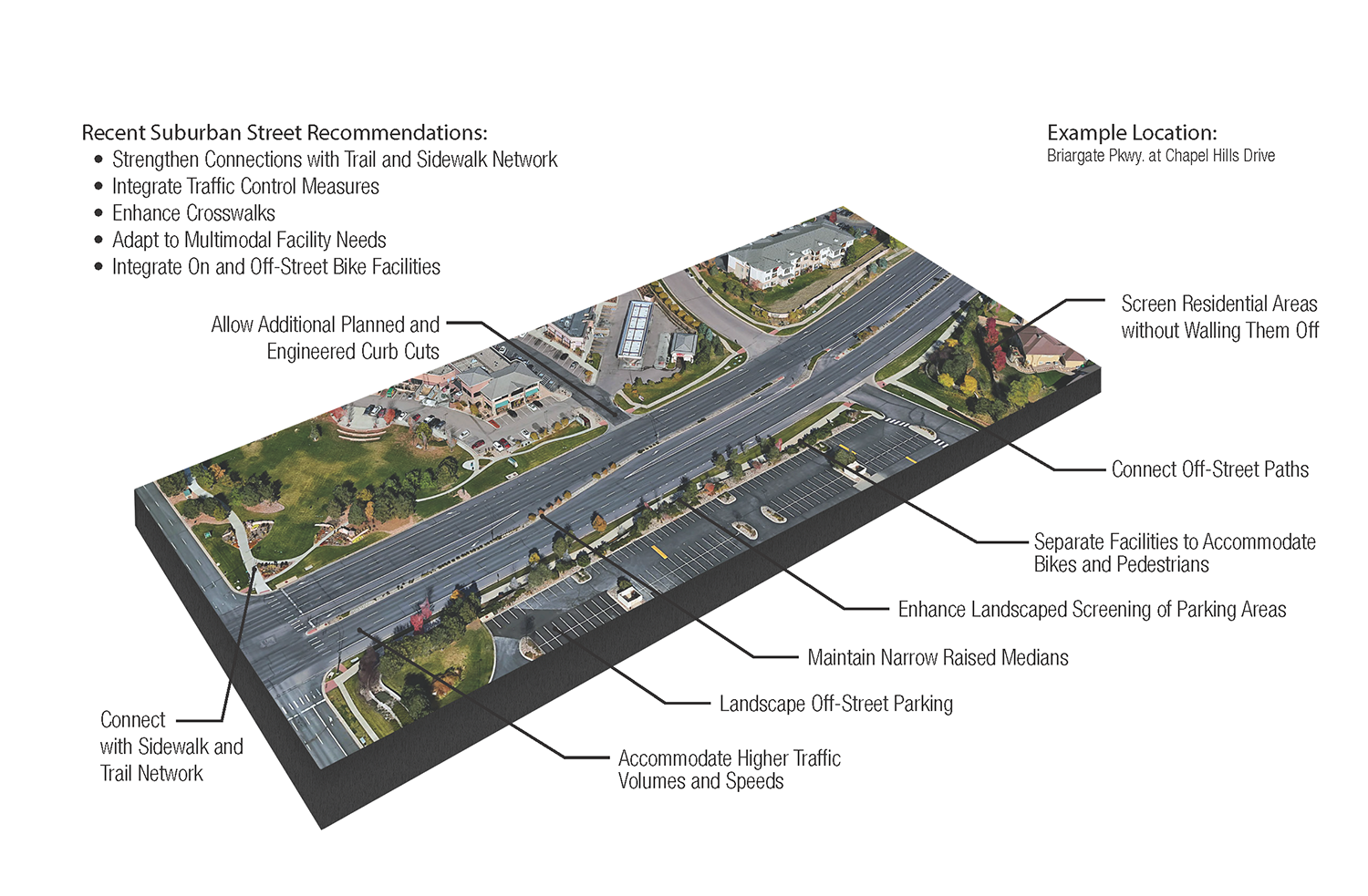 The goal of this transportation typology is to ensure the further application of multimodal facilities along these streets to optimize their capacity and to enhance their livability and adaptability as these neighborhoods mature. A key component in achieving this goal is ensuring strong and safe connections between on-street and off-street non-motorized facilities.

Streets in this area follow the classic recent suburban street pattern of curvilinear roadways with a limited grid and intersections. These streets were planned and designed after the 1980s and were constructed similar to the City’s current typical street sectionA set of standards for how the public right-of-way is divided between sidewalks, bike lanes, travel lanes, and medians. standards. These streets are generally characterized by raised medians, sidewalks, tree lawns, and limited direct access to adjacent land. Residential buildings are either set back from the street or oriented away and screened from the roadways with walls or fences. Within this typology there are several distinctions that are important to the application of PlanCOS.

The goal of this transportation typology is to apply best practices that result in new streets and corridors that accommodate a variety of modes for newly developing areas as they emerge over the next 20 years.

Future streets are major transportation corridors that have yet to be built in the city, most notably within Banning Lewis Ranch. These areas provide an opportunity to create, from the ground up, new connections that reflect the Strong Connections vision and goals of PlanCOS.

Special Focus Corridors are corridors identified for a particular type of transportation application. PlanCOS identifies three types of these corridors:

The goal of this typology is to transform or further transform these corridors into transit-supportive areas of focus for development, redevelopment, and community life.

The goal of this typology is to strategically invest in and implement emerging technologies to provide enhanced and safer travel, leverage and economize existing investments, and support the economic development of the city and region. 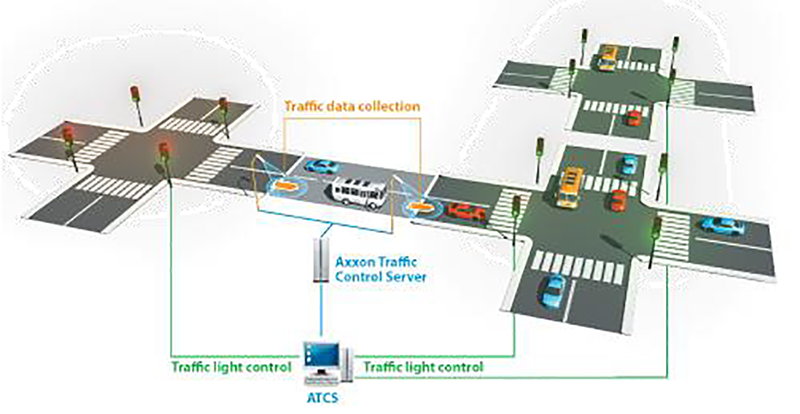 The goal of this typology is to develop and maintain these facilities as limited access, high speed, high capacity, vehicular and transit corridors while, improving and maintaining non-motorized connections across these facilities and reasonably addressing adverse impacts to adjacent properties and development, including noise and limited local connectivity. 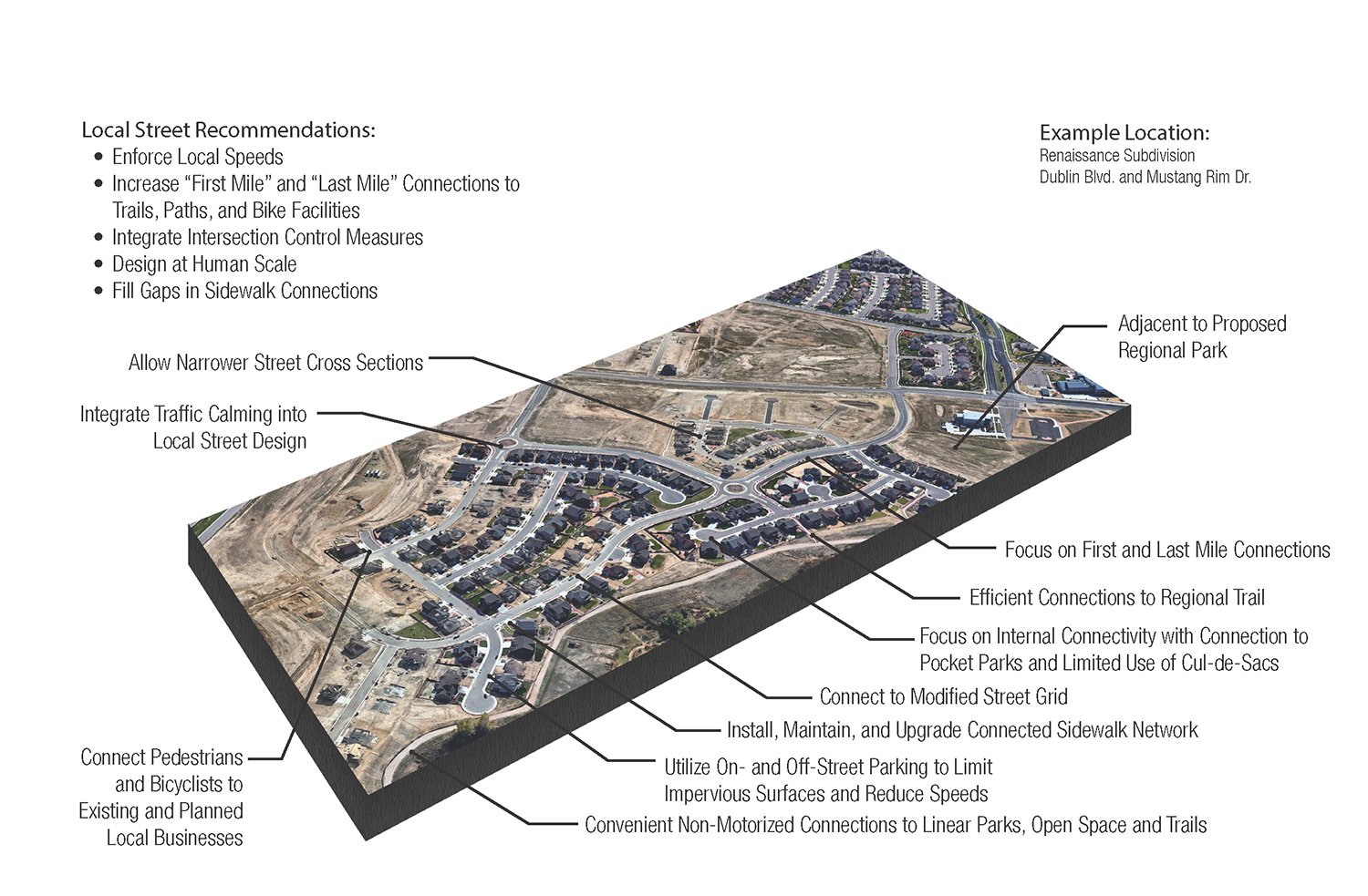 The goal of this transportation typology is to emphasize safety and local connectivity while deemphasizing vehicular speed. Within the parts of this network serving local origins and destinations this is accomplished through enforcement, increased connections, intersection control, narrower streets, and emphasis on designing or adapting facilities at a human and pedestrian scale.

Our community needs and aspires to be physically connected at the very local level. From a trip-making perspective, local connections address what is sometimes referred to as the “first mile,” “last mile,” or in some cases “only mile” traveled. This typology impacts every home, business, and other destination in the city and encompasses the majority of the City’s overall network, including neighborhood and low-volume roads. Availability of, connections with, and the safety of non-motorized modes are essential components of this typology. Because of the scale of this typology, it is manifested in hundreds if not thousands of locations throughout the city, each with its unique context and conditions. Therefore, PlanCOS only provides generalized guidelines, and specific locations are not included in the Framework Map.